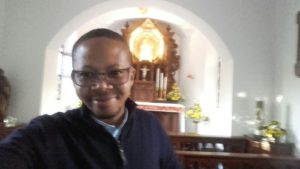 Last Thursday; 13 October 2016 I went to meet Fr Simon Donnelly, a priest who was ‘brought up’ by Sr Kathleen,  as we were about to part ways he gave me his ordination card which has the picture of the MTA On the flip side… Yesterday, Thursday again (20 October 2016) I was walking on my way to pick up a book from a fellow Law Student Priest- an Oblate of Mary Immaculate- not to far from where I stay.

On the way I met two sisters whose habit was immediately recognisable to me: I stopped them and said DOVETE ESSERE SCHÖNSTATT SUORE! That means YOU MUST BE SCHÖNSTATT SISTERS! One said yes and I immediately said I am a South African who worked in Cathcart. The one sister responded in English, not only because I probably spoke bad Italian but because she did not speak it too well either; she was from Germany, having arrived in Rome the previous day.As we were about to part ways she gave me the MTA card with the prayer on the flip side in German. I felt that this was no coincidence- la mama sta cercando per me: the Mother is looking for me.

Today I told Fr Simon Donnelly that I want to go to the shrine one of these days. He said he also needs to go, eventually we decided that we would go in the afternoon. Simon works and stays at the Vatican. He sent me the GPS coordinates and we agreed to meet at the shrine. I saw the address and decided not to use my GPS since “I KNEW” where via Aurelia was. When I eventually reached the end of viaaurelia, I decided to punch the coordinates into my phone. It indicated that I was 30mins away from the shrine- there was a sciopero (strike) today and therefore no bus. I sent my location to Fr Simon telling him not to wait for me since I was at the wrong place. I missed the word antica- the shrine is on via aurelia antica!! No response from Fr Simon. I walked on- my knee beginning to hurt now…

Fr Simon responded saying he had fallen into a deep sleep and was sorry that he was not able to make it…We agreed to postpone our little pilgrimage to the shrine. However, I was not happy and I decided to go it alone. I was so excited to suddenly see awall on which there was the writing SCHÖNSTATT! I was let in by a Spanish Sister who was so kind to me, I asked if I could go into the shrine and she conceded. I knelt and prayed.

THANK YOU MOTHER FOR FINDING ME! 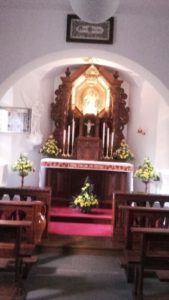 I sat down and decided to stop praying. By this time I was already filled with so much JOY and I needed a handkerchief. Then I realised that there is a book at the back of the shrine in which I wrote my prayer. For my family, all the people of Cathcart, for South Africa, the SCHÖNSTATT family world over and my dead brother. There is a JAR  in the shrine with the inscription: NON HANNO PIÙ VINO- they have no more wine! I immediately wrote another petition for all married people especially those at whose weddings and wedding anniversaries I ministered- that our Lady may always look after their sacred unions.That shrine is only 26 years old- probably a good place for praying for the S.A. University students…

As I was leaving I was offered an espresso which I enjoyed and I prayed that the sister did not notice that my eyes were moist. I believe today that what I have been saying to many people in my homilies about the bond that is created by frequent prayer is TRUE. Realising today that I had missed the MTA and the Shönstatt Shrine. I promised to visit her as frequently as I can.

Besides that, all is going well. Winter is at hand and time flies because there is so much studying to do. Most importantly, I am very happy to be here.

Blessings to all of you and to your loved ones.

Mother with your child- bless us, each and every one.